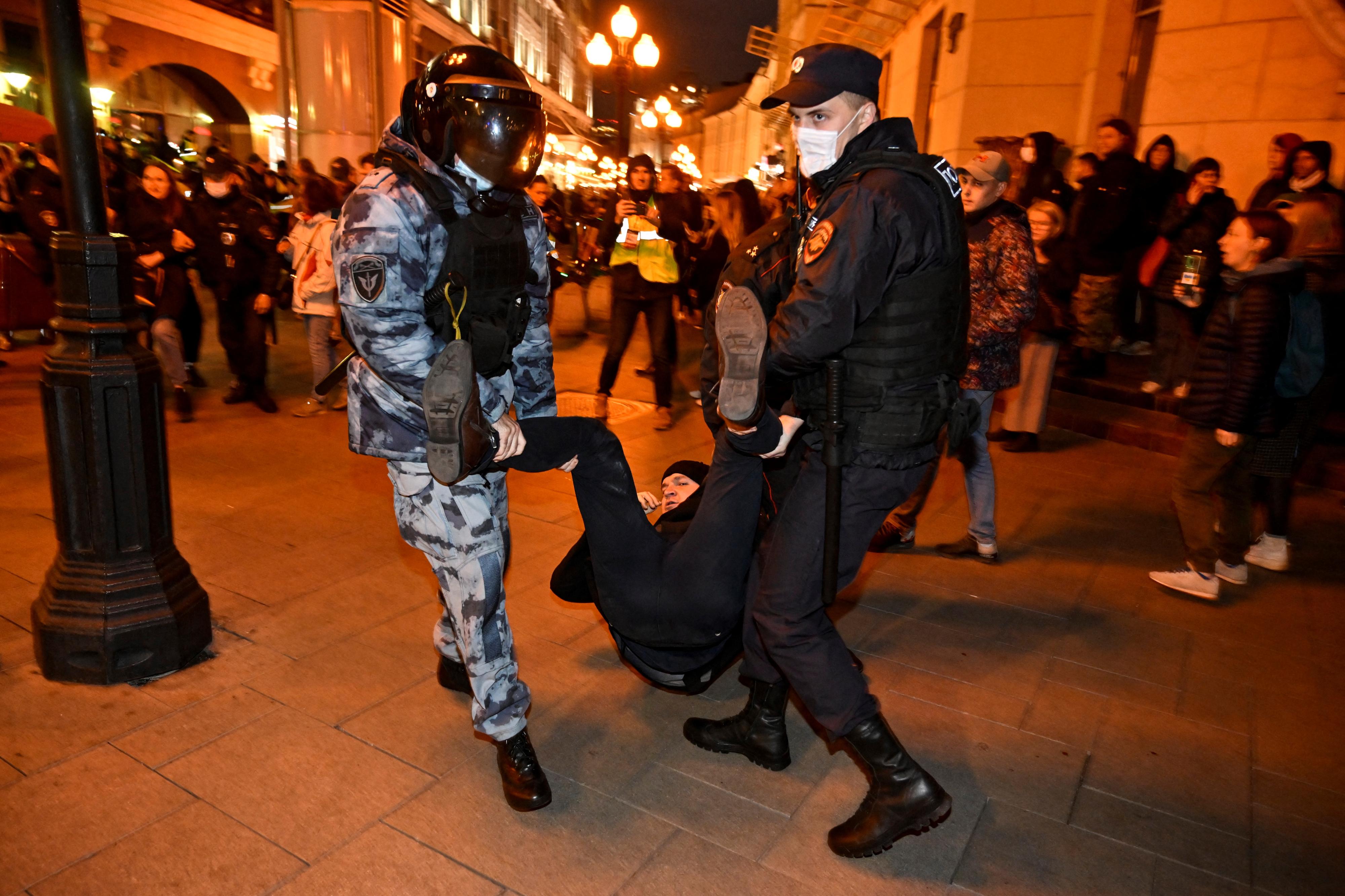 Dmitri flew to Armenia with just one small bag, leaving behind his wife and children, adding to the thousands fleeing Russia to avoid serving in the war against Ukraine.
“I don't want to go to the war,” he told AFP. “I don't want to die in this senseless war. This is a fratricidal war.”
Russian President Vladimir Putin's decision this week to mobilise several hundred thousand reservists has spurred a fresh exodus over the country's borders.
“The situation in Russia would make anyone want to leave,” said another new arrival, 44-year-old Sergei, who arrived with his teenage son.

Looking lost and exhausted in an Armenian airport, he confirmed that they had fled “because of the mobilisation”, but refused to give his full name.
“We choose not to wait to be called up,” said his 17-year-old son Nikolai. “I am not panicking, but I feel this uncertainty,” he added.
It was a sentiment shared by other Russians arriving off the same flight to Yerevan.
“It's wrong to go to war in the 21st century — to put it mildly,” Alexei, 39, told AFP.
He was not sure if he would ever be able return to Russia, he added. “It all depends on the situation.”

READ ALSO:  UCU Canons in another must-win game with Oilers

‘False information'
Military-aged men made up the majority of those arriving off the latest flight from Moscow. Many were reluctant to speak.
Yerevan has become a major destination for Russians fleeing since war began on February 24.
Since then, Armenia says at least 40,000 Russians have arrived in the small Caucasus country, once a part of the Soviet Union.
Nearly 50,000 Russians have fled to neighbouring Georgia, national statistics from June showed.
The Kremlin on Thursday dismissed as “fake” reports that Russians eligible for mobilisation were rushing for the exit.
“A great deal of false information has emerged about this,” said spokesman Dmitry Peskov.
But flights out of Russia were nearly fully booked for the week ahead to cities in the nearby former Soviet countries of Armenia, Azerbaijan, Georgia, Kazakhstan, Kyrgyzstan and Tajikistan.

And Putin's call-up order did not just provoke a dash for the exit — there were protests too.
Police arrested more than 1,300 people Wednesday at demonstrations against mobilisation across Russia, according to one group monitoring protests, OVD-Info.
On social networks, there were fears Russia would seal its borders.
But Germany's Interior Minister Nancy Faeser said Thursday Russian deserters could “obtain international protection” in her country.

‘Almost nobody supports the war'
Finnish border authorities said Thursday they had seen an increase in traffic from Russia following Putin's announcement. But it stressed that the influx was still at relatively low levels.
At the Vaalimaa border crossing in Finland, there was a line of cars about 150 metres long could be seen Thursday afternoon.
“It was busy in the morning and at night, but now it's starting to calm down,” Elias Laine, a border guard there told AFP.
A 23-year-old project manager from Moscow told AFP the mobilisation had pushed forward his plans to leave Russia by October.

READ ALSO:  Anerlisa Muigai reveals the only trait that can make her weak for a man

“I'm eligible for the call-up,” he explained.
“Some people went to protests because they've got nothing to lose. Others are looking into laws and talking lawyers to find out whether they can be conscripted,” he said.
And back in Yerevan, another Russian who had managed to get out said he was “shocked” by Putin's mobilisation announcement.
“Almost nobody supports the war,” he said. “This is all so painful. I want all of this to end soon.”
He declined to give either his first or last name, citing security concerns.